Colleen Darcy and her all-women crew from Hobart have made a brilliant start to the 2016 Australian Women’s Keelboat Regatta on a boisterous Port Phillip,  winning all three handicap divisions of race two after a conservative start in race one.

Two divisions, multiple classes and seven represented states comprised the overall pool of 177 competitors, some of whom have never sailed keelboats before.  The rough conditions saw some damage and a couple of WOB situations,  but no serious problems to the 26 boats.

Race one started in a solid 15 knots from the north-west. Some boats tried to brave the increasing winds by keeping up full mains, but those who reefed benefited significantly.

Absolut finished second in fleet and on corrected time placed third under AMS scoring, fifth under IRC and fifth under EHC handicapping.

Race two saw the south westerly shift settle in direction but increase in pressure, livening the course and bringing short, sharp chop with it.

On Absolut, Derwent Sailing Squadron member Colleen Darcey took a conservative approach to the whole race, emphasising the need to reduce the chance of error through unnecessary manoeuvres.

These tactics by the Tasmanian crew, which represents the Derwent Sailing Squadron, the Royal Yacht Club of Tasmania and Bellerive Yacht Club, saw Absolut lead the fleet round the course and win IRC, AMS and EHC on correct time.

Darcey explained: “We really pushed ourselves today; it was challenging but great fun out there. We were down one crew, which didn’t help, but it just made us work a little harder. 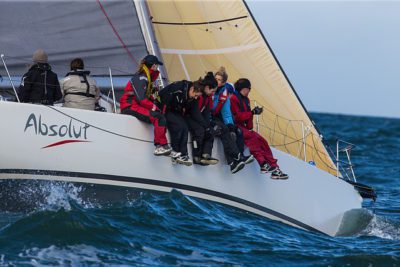 The Tassie crew packing the windward rail of Absolute today.

“Being from Tassie we’re used to the heavy weather but had to adjust our sailing to the slop and chop Melbourne’s Port Philip brings.

“We realised we needed to console our urges to play every shift and stick to conservative sailing. We’re certainly looking forward to adding more tactics and strategy to our game plan tomorrow.”